I will be posting Christmas themed horror films over the next 24 days, for the sixteenth night I am listing the 1984 English slasher movie Don't Open Till Christmas. 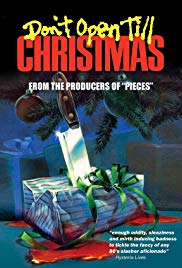 A British made Christmas horror movie, Don't Open Till Christmas has a mysterious figure who is murdering people who are wearing Santa suits during the holidays in London. Leading the investigation is a Scotland Yard Inspector and the daughter of the first victim, yet the Inspector may find that the killer is someone he has already encountered. Don't Open Till Chrismas is like many of the exploitation slashers of the day with plenty of nudity and bloody kill scenes to make this film somewhat sleazy compared to other Christmas themed horror films. The film was met with delays, revisions to the script and lead actor changes that resulted in the film taking two years to complete. The one notable role is a cameo by Caroline Munro who appears as herself during a theater sequence. Don't Open Till Christmas is not as well known as the contemporary Christmas horror films like Silent Night, Deadly Night or Christmas Evil so don't feel too bad that you may not have ever heard of this film.
Posted by The Losman at 11:09 PM