I will be posting Christmas themed horror films over the next 24 days, for the fifth night I am listing 1972 made for television horror thriller Home For the Holidays. 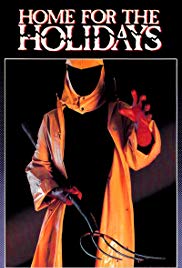 A television movie produced by Aaron Spelling and starring Sally Field, Eleanor Parker, Julie Harris, Jessica Walter, and Walter Brennan focuses on an older wealthy man who invites his four adult daughters to his home for Christmas and reveals to them that he fears he is being poisoned by his wife who is their stepmother. It is revealed that she had been accused of killing her first husband and the sisters are suspicious when a storm traps them all in the remote farmhouse with someone killing the daughters one at a time. This television movie plays out like a dark soap opera with elements of Agatha Christie yet the stellar cast and direction will keep you guessing as plenty of clues are shown that may be red herrings. The standouts among the cast include Sally Fields and Jessica Walter as well Julie Harris who plays the suspicious stepmother to the sisters. An otherwise forgetful movie from the 1970s that gets more attention as being one of the early horror movies that take place on Christmas.
Posted by The Losman at 11:26 PM