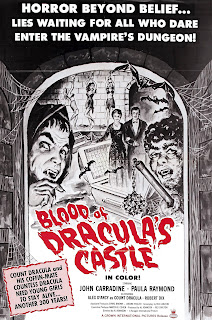 A young couple visits a castle and encounters an eccentric couple who plans to imprison them to satisfy their bloodthirst. Directed by legendary B movie director Al Adamson, Blood of Dracula's Castle has the look of a low-budget movie with actor John Carradine receiving top billing despite his role as the family butler. Alexander D'Arcy portrays Count Dracula, but he might have settled for Count Chocula as his part is pretty dull compared to Carradine's role. One of the other problems is the film's poor quality that may result from a degraded master print that is in desperate need of restoration.