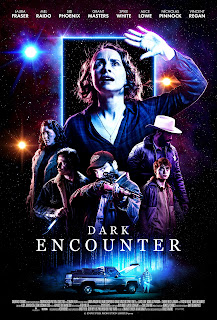 A young girl disappears from her home, and the family's grief is shown a year later when a memorial service is held to offer closure. However, that evening the circle of friends and family witness a series is strange lights that put them all on edge as they fear it may be related to the disappearance. Dark Encounter is a 2019 sci-fi thriller directed by Carl Strathie and starring Laura Fraser, Vincent Reagan, and Alice Lowe. Despite the film being set in the US, Dark Encounter was filmed in the UK, with most actors not showing a hint of an accent. The movie does feature a series of terrifying events that fans of alien abduction movies will appreciate, yet the film is more than it appears to be and worth the time.