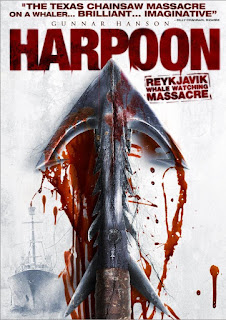 Iceland is a nation that is rarely mentioned in movies unless it is a Cold War thriller, so it is unique to find a horror movie set in such a remote area. After a freak accident kills the captain of a whale-watching boat, the international guests are rescued but fall prey to a group of people on an old whaling ship who have turned to hunt humans on their rusting ship of horrors. Harpoon is a 2009 Icelandic slasher movie notable for the appearance of Texas Chainsaw Massacre Leatherface actor Gunnar Hansen in a small role. Harpoon is a bloody movie with a fair amount of dark humor and creative kills that one has to appreciate the casting of Icelandic-born actor Hansen. The movie's plot and isolated setting on the old ship make it a nice homage to TCM, and it could have been called the Icelandic Harpoon Massacre as a result. Harpoon can also be found with the title Reykjavik Whale Watching Massacre.