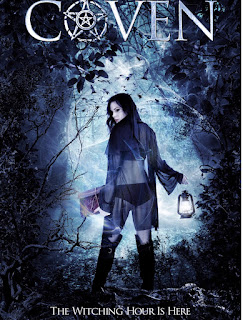 One of the most popular horror movies of the 1990s was the teen witch movie The Craft, featuring an impressive cast of young and talented ladies; the film was a hit with younger audiences and remained a popular film even after 25 years. The 2020 movie Coven tries to follow in the heels with a story that copies The Craft but with young women in lingerie. The young coven is seeking to unleash the power of an ancient witch named Ashura, and the leader promises any wish they desire despite not knowing how dangerous it is to dabble in dark arts. Directed by Canadian photographer and music video director Margaret Malandruccolo, Coven is beautifully shot for its small budget. The actresses benefit from her eye for fashion and the minimalist sets used for the rituals. Coven does feature a good cast of young actresses, but the film recycles the plot of The Craft too much to make the film nothing more than a derivative knockoff movie.