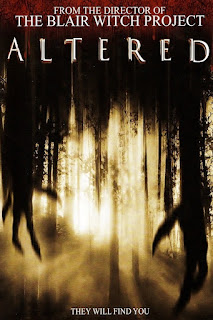 Five friends were abducted by aliens 15 years ago; only four were found. Fifteen years later, they have captured one of the creatures, and their greatest fear is now what to do with it. Directed by Eduardo Sanchez, Altered is a tension-filled tale that focuses on the aftermath of a terrifying event and how it has affected the survivors who are lifelong friends. Director Sanchez is best known as one of the men behind The Blair Witch Project, and his direction of Altered shows his skill in using setting and isolation to create a compelling and scary story inspired by the film Fire in the Sky. The alien and gore effects are done well and don't distract too much from the good performances by the small cast.