70 Days to Halloween- 1949 The Legend of Sleepy Hollow

Over the next 100 days, I will present one movie of significances in horror, suspense or thrillers for each year from 1919 to 2018. The next film presented here is the 1949 cartoon short "The Legend of Sleepy Hollow" narrated by Bing Crosby. 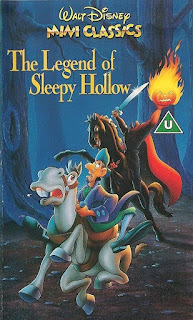 Washington Irving's "The Legend of Sleepy Hollow " was produced as a cartoon short along with "The Wind in the Willows" by Kenneth Grahame by the Disney Studio with Bing Crosby narrating the segment on Sleepy Hollow.  Ichabod Crane was a lanky bookworm who arrives in the town of Sleepy Hollow to take the job as the school headmaster. He soon wins over the women of the village despite being a dandy that the local men make fun of especially the brutish Brom Bones. The two men soon compete for the attention of the beautiful Katrina van Tassel who is the daughter of the wealthiest man in town. After discovering that Ichabod is superstitious, Brom weaves a terrifying tale of a headless horseman who haunts the roads of the town on Halloween. Ichabod rides home and soon finds that he is being pursued by a headless rider that seems to be very real and scary. The cartoon would become a television staple years and would be included on some Disney Halloween specials and be turned into a feature movie the changes the story substantially.
Posted by The Losman at 11:43 PM