Over the next 100 days, I will present one movie of significances in horror, suspense or thrillers for each year from 1919 to 2018. The next film presented here is the 1956 psychological horror thriller "The Bad Seed" starring Nancy Kelly, Patty McCormack, Henry Jones, Eileen Heckart and directed by Mervyn LeRoy. 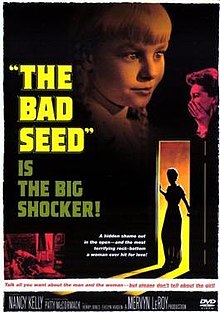 Long before we were cursed by any Macauley Culkin movies, Mervyn LeRoy directed what has to be one the earliest and darkly humorous evil child movies. Christine Penmark (Kelly) has what every young woman dreams of, a loving husband, a perfect home, and a little girl with pretty pigtails. Little Rhoda Penmark (McCormack) is far from being the sweet little girl everyone sees. We witness her stealing a sports medal from a boy, lying to any adult who is gullible to believe her and possibly much worse. Making matters worse are the recurring nightmares of Mrs. Penmark and their dire warnings that may be a clue to Rhoda's unhealthy behavior. As the town becomes aware of Rhoda's behavior and actions, little Rhoda uses her sick influence to trick her mother and avoid blame and punishment. Ultimately Mrs. Penmark discovers her daughter's dark secrets and must then decide how to deal with them. Maxwell Anderson based the Bad Seed on a play, and when it was released caused quite a stir. The original ending was revised by the producers due to pressure from the Motion Picture Boards who objected to its twisted conclusion; the released version has one which I feel is much more appropriate and quite funny. Pay particular attention to this ending and the cast credits that offer a most humorous conclusion. If little girls are indeed made of sugar and spice, this one has a bit too much cyanide mixed in.
Posted by The Losman at 10:30 PM