Over the next 100 days, I will present one movie of significances in horror, suspense or thrillers for each year from 1919 to 2018. The next film presented here is the 1932 Universal horror thriller "The Mummy" starring Boris Karloff and directed by Karl Freund. 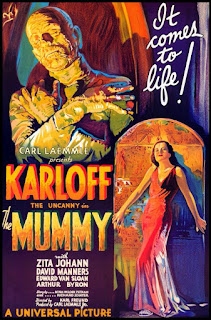 Boris Karloff once again sets the screen afire with yet another excellent performance as a classic monster. He portrays an excavated mummy who is brought back to life by a Sacred Scroll. Ten years later the mummy, who is now in the guise of a scientist seeks to return his beloved princess with whom another modern woman matches. All the elements are present in this beautiful classic horror film that would be followed by many inferior copycats, Hammer remake, and a few recent productions.