Bad Movies That Are Great- 70 Days to Halloween 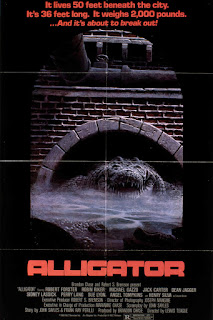 Alligator (1980)
Dir- Lewis Teague
Flushing those little alligators down the toilet seems a lot less likely when you see the carnage laid by this genuinely pissed off reptile. Fed on sewer rats and who knows what, the gator grows to enormous proportions and busts out of the sewer to eat politicians, pimps and all sorts of assorted scumbags. Henry Silva is hired as the big game hunter to deal with this pesky reptile. With plenty of blood, guts and a fun wedding scene, you have a film that will keep you from snoozing, at least for about 20 minutes. 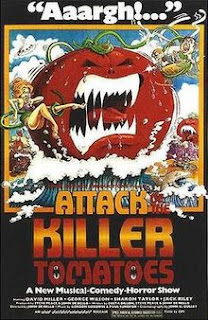 Attack of the Killer Tomatoes (1978)
Dir- John De Bello
You must be a from another planet to have not heard of this classic baddie. The world is held at bay by killer tomatoes which have a terrible attitude. Along the way, we get every imaginable swipe and cliché from some of the most famous horror films. Not only a staple at every Bad Movie Festival but considered by many to be the worst movie ever made, if not the most comically fun. With a cast of thousands (tomatoes) and a song that is just as famous, Attack Of The Killer Tomatoes was infamous enough to get three sequels and a television cartoon series. 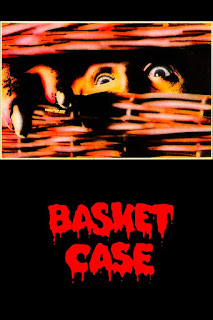 Basket Case (1982)
Dir- Frank Henenlotter
One of the most famous low-budget horror classics of the eighties is also one of the coolest cheese films to come in a long while. Kevin Van Hentenryck plays a shy young man who travels with a wicker basket in hand through the streets of New York City. What is inside the basket is his twin brother, a telepathic mutant who was once attached to the shy boy. The pair is on a quest to find the doctors who separated them years before and take them out in most cruel ways. With a look and feel of a small budget film, Basket Case is that rare horror film that uses its bare-bones budget to craft a movie that looks and feels like an early film by John Waters and David Lynch. Not a bad movie but a cheese film that has attracted a cult following and a sequel. 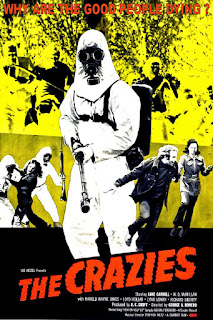 The Crazies (1973)
Dir- George Romero
An army of soldiers clad in gas masks and chemical suits storm into a town that has encountered a contaminated water supply due to a plane crash, turning the village into murderous psychos. Many weird folks are running around stabbing each other and turning into crazed zombies. Ultimately it seems the soldiers that are sent in become just as nuts as they shoot everything in sight. George Romero's first significant follow-up to Night of The Living Dead, and it is one of his most underrated films. The low budget look and great costumes add to a movie that is not as gory as Living Dead but just as much fun to watch. 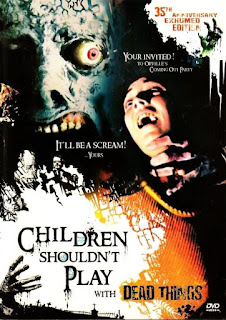 Children Shouldn't Play With Dead Things (1972)
Dir- Bob Clark
A team of actors travel to an island to film a horror movie; they play practical jokes and engage in a foolish supernatural ritual. The result is their unlikely death as they awaken a pack of wild zombies who rise from the dead. This spoof of Night of The Living Dead is half horror/half humor and is surprisingly more gory than one would imagine, yet its hokey look makes it a significant cheese classic. 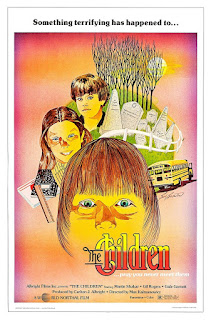 Children, The (1980)
Dir- Max Kalmanowicz
A toxic cloud over a country road turns a school bus full of kids into a pack of deadly killers. They return to their folks and fry them like bacon. This exploitation shocker packs nothing but fresh grade cheese and reused music from many other horror films. A genuinely creepy film that will make you reconsider moving next to chemical plants. 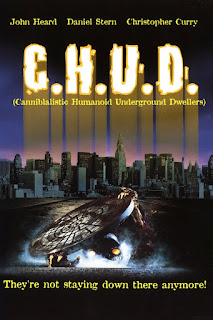 C.H.U.D. (1984)
Dir- Douglas Cheek
Cannibalistic Humanoid Underground Dwellers, that's what the government calls those weird and slimy creatures who are dwelling in the subways of New York. It seems the homeless have yet another problem to make their miserable lives worse as the monsters come up to feast on them and anyone else they encounter. It is up to a homeless, Daniel Stern and photographer John Heard to discover the real truth behind these creatures. A real grimy and gory horror film that attracted hordes of fans with its cool title and icky monsters. Followed by a sequel that sets new bounds for suckiness. 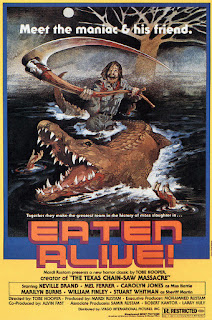 Eaten Alive (1976)
Dir- Tobe Hopper
Tobe Hopper's follow-up to The Texas Chainsaw Massacre was this silly film about a Florida Tourist Trap owner who has a hungry crocodile that he uses to dispose of bodies. His guests are just as weird as he has visits from Freddy Krueger and Morticia Adams, well not really but the actors who play them are. Not too bad as a horror film but I think Tobe Hopper's best effort was used up by Chainsaw Massacre. 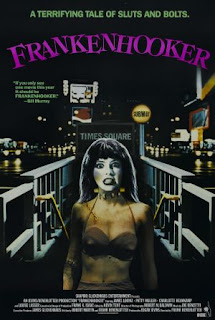 Frankenhooker (1990)
Dir- Frank Henenlotter
Ever wish you could have the girl of your dreams, well a young scientist has a great one until his latest lawnmower invention cuts her head off and kills her. He then becomes obsessed with rebuilding her and dopes prostitutes with an explosive form of crack for their body parts. He then pieces her together in a Bride of Frankenstein style, yet her hooker tendencies come out, and she ends up killing her tricks. More of a parody than a straight horror film, the real gag is that the cartoonish gore and stitched up the body are pretty decent. The director Frank Henenlotter was also responsible for Basket Case and Brain Damage, and with the film's wildly funny direction and outrageousness it shows. 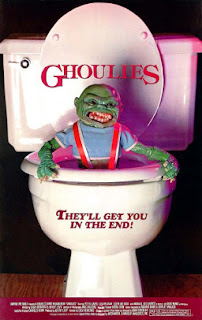 The Ghoulies (1984)
Dir- Luca Bercovici
I recall when this one was released, it was such a blatant rip-off of the hugely successful Gremlins movie that it got some people to watch it. A guy inherits an old house and finds the evil Bible that his Satanist father used to worship. He then becomes possessed, and after reading it, we get a mixed group of little demons. The Ghoulies are a slightly sick and creepy looking set of puppets that invade the house and reap havoc. What we then get is a standard fight them back into hell showdown with lots of blood and guts. I guess they wanted us to think the ghoulies were cute and cuddly, but most were just plain ugly.
Posted by The Losman at 11:53 PM