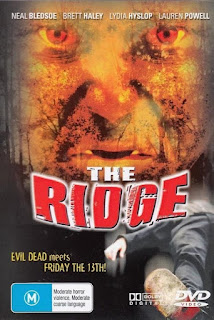 College friends take a trip to a remote vacation home in the woods and become victims of a killer who may be based on a local urban legend. The Ridge is a low-budget home invasion horror movie directed and written by Brett Haley, who appears as Blake. The movie is a routine slasher inspired by the legend of The Ridge Runner. While the story has potential, the film spends too much time with characters talking and nothing happening until an hour into the film. In addition, many of the kills are made with poor lighting, and the killer's motives are not explained. The few interesting characters are killed too early, and we are left not caring about those toward the end. The Ridge isn't terrible, but the low-budget hampers what could have been a better movie.