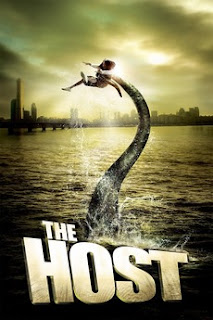 On the banks of the Han River, a simple food vendor watches in horror as a monster emerges from the river and takes his daughter. Fearing that he has lost her, he gets a message showing she may be alive and in the sewers. As he begins his quest to rescue her, he finds that outside parties are working against him to hide the secret about the creature. The Host was one of the biggest films to open in South Korea, this success, along with an excellent review, helped the film to gain a following outside of the Asian market. Critics praised the movie for its effective blending of various genres by mixing family struggles, distrust of the government, and, of course, the amphibious monster that was not as large as many other monsters in movies but shown in great detail.
Posted by The Losman at 11:46 PM