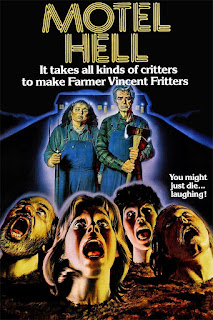 Farmer Vincent is known for his fantastic smoked meats that are second to none. He also runs a small motel with his younger sister, but they have a secret, and it's not preservatives. Vincent's younger brother is the local town Sheriff, and he is not aware of his brother's secret, but this may change when a lovely young accident survivor draws Famer Vincent's attention away from his work. Can Farmer Vincent share his secret with his new lady friend? Motel Hell is an excellent satire that offers laughs as well as chilling frights. The movie subject matter is disgusting, yet it is presented in a fun and campy way that makes this film stand out as a fantastic black comedy as well as a horror movie. Screen Cowboy legend Rory Calhoun portrays Famer Vincent with a folksy charm that makes him amiable and friendly to all. The film also offers some great cameos in the cast, but it's best to go in cold to enjoy this fun little film. Motel Hell has emerged as a Midnite Movie classic often sharing space with similar B-Horror movies, but don't let that deter you; this is a great and fun movie for those who enjoy dark humor. Scream Factory has released this cult classic on Blu Ray.
Posted by The Losman at 11:46 PM