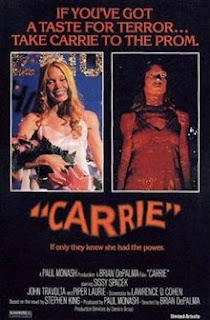 Starring a cast that would provide many well-known Hollywood players, Carrie is both a sad and frightening tale of ostracism and revenge. "Crazy Carrie," as she is called, is portrayed quite effectively by Sissy Spacek in a role that would stand out in horror movie lore. Carrie is a loner, teased by her classmates and taunted by her zealously religious mother, but she has a secret. It appears Carrie has powers that seem to be barely under her control. When it appears that her peers are finally accepting her, we discover that they wish to play a cruel joke on her during the senior prom. Tragically, the prank pulled on her goes wrong, the release of pig's blood on her and the subsequent laughter by both students and teachers unleashes a fury of anger as she burns the school and kills everyone in her path. Her final confrontation with her mom is not only frightening but also tragic. Carrie earned Sissy Spacek her first Oscar nomination and was a commercial success for the filmmakers and Stephen King. With its excellent cast, good direction, and a climactic finale, we have a classic shocker that still has an impact today.
Posted by The Losman at 12:29 AM