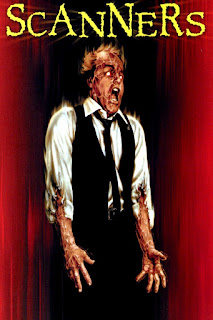 A homeless man named Vale with psychic abilities is recruited by a group to do battle with a powerful psychic known as Revok. Both men are known as Scanners and possess the ability to read minds and other skills that would make them powerful weapons. As Vale is trained to understand his abilities, he has to avoid assassins sent out by Revok and learn the secret of their abilities. Scanners is a 1981 sci-fi horror movie directed by Canadian David Cronenberg. The film was notable for the fantastic special effects created by makeup artist Dick Smith that included the famous head explosions. The film has become a cult classic and one of Cronenberg's most memorable movies along with The Fly remake.
Posted by The Losman at 12:01 AM