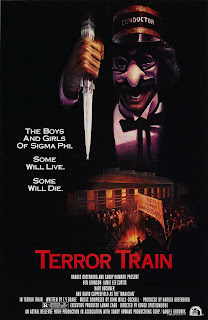 Terror Train is one of many slasher films to come from Canada after the success of Halloween in 1978. Terror Train sets the events on board a train during a frat party celebrating the New Year. The group of young men and women find that their friends are dying one at a time. The mystery of who is responsible is made all the more difficult as each of them is in costume. One of a trio of films that would feature Jaime Lee Curtis, Terror Train is the only one not to be followed by sequels and remakes. The film is better than most slasher films and makes an effort to stand out with the smart use of a costume party to help disguise the identity of the murder as well as keeping all of the action in a contained location. It is often overlooked but worth checking out if you are a fan of Scream Queen Curtis.
Posted by The Losman at 8:54 PM