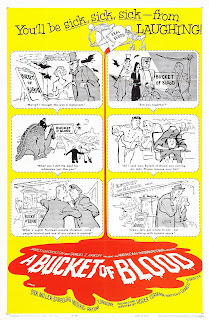 A standard Roger Corman quickie that does the job and manages to spoof the beatnik movement as well as the new craze of horror movies like House of Wax and Curse of the Demon. A bumbling busboy has a fascination with art and tries a new and unique style. After accidentally killing a neighbor's cat, he gets inspired to cover up the evidence with some molding clay. He then half-wittingly murders people and covers their body with earth and displays them at his coffee house to get attention from the customers. All in the hopes of impressing the artistic types with whom he wishes to befriend. With all idiots comes his eventual discovery, and the finale is somewhat novel in his wanting to go out in style. In the form of Corman's more famous Little Shop of Horrors, which he would make the next year. A real delight to those who want to see even more of Corman's early little-known work.
Posted by The Losman at 11:38 PM