Back in 2015, I was reading on message boards about a new horror movie that was scaring people despite having a simple budget and being a found footage movie. I finally found and watched the movie Hell House, LLC in 2016, and I even reached out to the Director Stephen Cognetti. I became a fan of this film and viewed it several times, often recommending to fellow fans of horror. 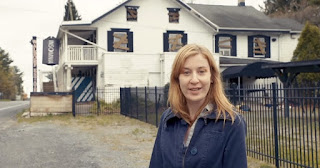 The premise of the film featured a team led by Alex Taylor (Danny Bellini) who owned and operated a hunted house attraction but for reasons undisclosed had to relocate to a smaller town. The crew completes their work despite obstacles like lack of money and the location's dubious reputation. On opening night the facility was immediately shut down after a mysterious event killed several patrons and staff minutes after the firsts guests entered. The first film explored the events of that disaster using interviews and mockumentary format. Director Cognetti would release a sequel film in 2018 titled Hell House LLC II: The Abaddon Hotel that took us back to the Abaddon Hotel 8 years later. A TV reporter with Morning Mysteries Jessica Fox (Jillian Geurts) takes a camera team and breaks into the hotel only to find that something dark and terrifying is present. In 2019 Director Cognetti takes us on a third and final journey as the real secrets of the Abaddon Hotel are revealed.

Hell House LLC III: Lake of Fire does not sway away from the found footage format of the first two films as a group of people is hired to renovate the Abaddon Hotel.  A live interactive show called Insomnia is being presented with actors performing Faust as guests watch and explore the hotel. The project is funded by an entrepreneur named Russell Wynn (Gabriel Chytry) who convinces the cast and crew to sign on for the promise of money. Russell also intends to show them that the hotel is nothing more than a building needing a fresh coat of paint despite the recent events. A reporter named Vanessa Sheppard (Elizabeth Vermilyea) documents the preparation of the facility and show. Vanessa hosts the same Morning Mysteries that her previous colleague Jessica hosted before her disappearance in the second film. The cast and crew are given cameras and asked to record the events of the preparation, but members of the team soon notice that bizarre occurrences are happening. The events of the opening night are shown in an eerie parallel to the those of the first movie. 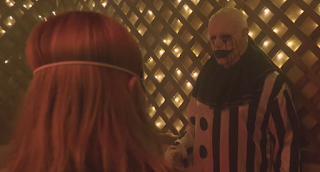 The Hell House LLC movies all share the same location being a genuine haunted house attraction in Lehighton, Pennsylvania. This facility helped the Director keep down costs as the building was already fitted out by the owner, who also worked as the set designer. The cast of unknown actors adds to the story as their fear and tension give the movie the boost needed to carry the story. One of Hell Houses best gimmicks are the clown mannequins that are not only scary looking but are skillfully utilized to capture the actor's reactions. The clowns are quite useful, given that larger budget movies would have used CGI or complicated special effects. The Hell House movies rely more on old school techniques to scare the audience using shock scares, and the buildings creepy basement to maximum effect. The found-footage nature is well employed with the events being shown and mixed with interviews. Flashbacks also capture the reaction of the survivors and victims as when the events unfold. 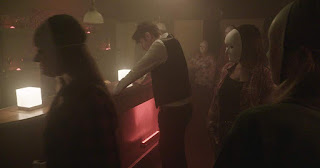 The third film of this trilogy does a better job than the second film in recapturing the spirit of the first Hell House. Hell House III also brings effective closure to the series by tying up loose ends from the first two movies showing the genuinely sinister nature of the Abbadon Hotel. The dark secrets it posses undoubtedly make for a terrifying film that is not too long with plenty of scares in the finals moments of the movie. For a small budget film, the Hell House III is a welcome addition to a series that has won over fans of found footage, haunted attractions, and creepy ass clowns.


All three Hell House LLC films are now streaming on Shudder.
Posted by The Losman at 11:43 PM