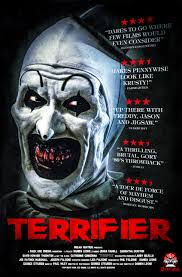 Coulrophobia is the irrational fear of clowns, and in recent years we have had some films released with scary clowns as well as seeing clowns featured in haunted house attractions. 2013's All Hallow's Eve featured a menacing looking killer by the name Art the Clown who appears in some segments in the anthology and the finale. This time around in the Terrifier we find a disfigured woman being interviewed about the events of her near death at the hands of Art the Clown. We then see two young ladies enjoying a carefree night of Halloween fun until they attract the attention of the killer clown. His menacing and silent stare will soon give way to his bloody and sadistic nature as Art targets these women and some strangers who are in the wrong place on the worst night of their lives. Terrifier is a gory movie with a sadistic killer clown that revels in mutilating his victims in creative ways and willing to use any kind of improvised weapon as well as one not often seen in slasher movies. The movie makes effective use of practical effects, and the gory murders are graphic enough to make you know this movie means business. David Howard Thornton stars as Art the Clown and his portrayal are devilishly effective as a villain who is mute and must use facial gestures to express himself in his ghoulish clown makeup. The story is the usual cat and mouse variety, but this film is more about watching Art capture, torture and mutilate his victims. Terrifier is an effective and bloody slasher film that follows the usual formula of 1980's horror films and has crowned Art the Clown as one of the new faces of horror.
Posted by The Losman at 11:05 PM