Over the next 100 days, I will present one movie of significances in horror, suspense or thrillers for each year from 1919 to 2018. The next film presented here is the 1964 Japanese ghost thriller "Kwaidan" directed by Masaki Kobayashi. 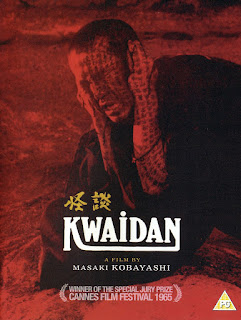 With a title translated as "Ghost Story," this Japanese production made use of traditional folktales to spin visions of terror and fear. Kwaidan presents four stories featuring ghosts and spirits of Japanese lore. The first an impoverished samurai leaves his house and wife to serve a wealthy warlord only to come back and find his wife waiting as he had left her. The second a blind minstrel recounts an epic battle before ghostly audience just to have his life force being drained. The monks who care for him paint incantations on him as a protective measure but forget one crucial detail. The third a woodcutter meets death and must keep her secret or face instant death. Finally, a man sees a face in a bowl and cannot avoid its terrible message. Each film gives a great feel of the supernatural and makes excellent use of atmosphere and setting to bring the viewer a true feeling tale of terror and shock. Although a flop in Japan, the movie would later attain cult and critical success outside of Asia. In its American release, they left one story out to cut down on time, as this is a long movie, pity that they cut a film that is such a masterpiece of horror. Thanks to the Cannes film festival and an excellent video release we can admire this movie in its glory.
Posted by The Losman at 6:26 PM