Over the next 100 days, I will present one movie of significances in horror, suspense or thrillers for each year from 1919 to 2018. The next film presented here is the 1972 exploitation horror film "The Last House on the Left" starring Sandra Peabody, Lucy Grantham, David Hess, Fred Lincoln, Jeramie Rain and directed by Wes Craven. 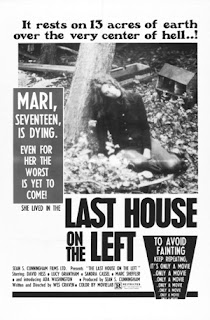 Wes Craven made a name for himself as a leading director in the horror genre with such notable films as A Nightmare on Elm Street, Scream, and The Serpent and the Rainbow. His directorial debut will always remain one of the most perverse and vile films to be seen as a horror classic. Joined by Sean Cunningham (Friday the 13th), Craven used Ingmar Bergman's Virgin Spring as a loose guide in this film that has two young girls out for a good time meeting up with a trio of murderers. The gang brutalizes, rapes and murders both girls. Afterward, the trio somehow finds their way back to the house of one of the girls and when caught face wrath far worse than anything committed by the trio. This film is a compelling look at revenge and the day-to-day violence with which we have become blind to. What also adds to the movie's shock value is that it was a shoestring budget with a cast of unknown actors, making it feel more like a documentary than an exploitation slasher flick. Usually, a piece of cheap exploitation like this would be hidden away or fall into the abyss of rental hell, yet with Craven's reputation and a surprisingly positive review by none other than Roger Ebert (I kid you not, this is a personal favorite of the critic). The Last House on the Left has found itself to be a milestone of splatter flicks and as one of the most disturbing revenge films made.
Posted by The Losman at 8:27 PM