A Violent Descent Into Madness 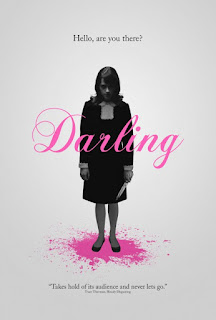 Dir- Mickey Keating
Owing much to Roman Polanski's early films, Darling is a psychological thriller about a young woman's slow descent into madness as she takes on a job as the caretaker of an old mansion in Manhattan. Shot in black and white and utilizing little dialogue, Darling uses subliminal edits and unsettling music to tell a story that is shown in a series of chapters leading to an inevitable tragic outcome. Lauren Ashley Carter excels in a role that is not the usual scream queen fare, displaying a wide range of emotions that include isolation, detachment from reality as well as paranoia. Darling is certainly not original, but Ms. Carter does not disappoint in this indie thriller that she also co-produced.
Posted by The Losman at 12:23 AM