The Luck of the Irish..Just Ran Out! 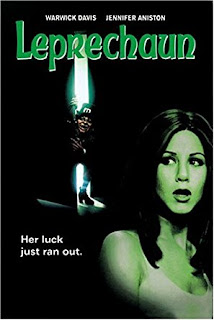 
Dir- Mark Davis
Warwick Davis has had a great career playing in such epic films as Return of the Jedi, Willow, and Harry Potter, yet he displays a real lack of taste in this dated slasher flick. Davis plays the little Irish Fairy who is after a group of people he thinks stole his pot-of-gold. Borrowing from the likes of Freddy Krueger and Chuckie, we get a rather sad attempt to recreate an amusing bad guy the likes of Freddy. After years of derivative slasher films, you would think that a gimmicky horror character would seem out of place after such fantastic horror fright films like Silence of the Lambs and Candyman. Not so, we get the same retread of sick jokes, gory deaths, and silly overage teens including Jennifer Aniston. The special effects are the only real saving grace, but FX alone cannot carry a film. Like a bad habit, the producers have decided to curse us with seven sequels to include a trip into space and a pair in the hood. Mr. Davis appears in 6 of the films yet the series did not catch on and the last five movies were released direct to video.
Posted by The Losman at 11:54 PM