Bad things happen when you get lost in the woods 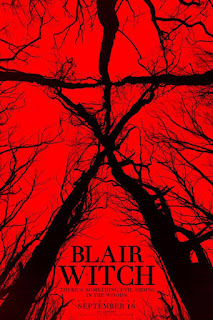 Dir- Adam Wingard
In 1999 the Blair Witch Project had one of the most significant impacts in film history making nearly $250 million on a budget of $60,000. It helped to usher in the new genre known as found footage and to this day remains one of the most successful horror movies ever made. Despite the success of the first film a direct sequel would not be released until nearly 17 years after the original. Blair Witch follows James Donahue, the younger brother of Heather Donahue who after watching a mysterious video leads a group of friends into the Black Hills Forest to seek answers to the disappearance of his sister and her team. Despite warnings from his friends, James invites a pair of locals who act as guides but once in the woods the very mysterious events that plagued his sister begin again as they try to find clues to the location of the mysterious house his sister was last seen alive. Ignoring the 2000 follow-up movie Book of Shadows: Blair Witch 2, Director Adam Wingard chose to make a film similar to the first but with a bigger cast to include more scares. The movie was made under the fake name "The Woods" to keep its production secret so they could make use of the viral marketing that was so critical to the success of the first movie. Blair Witch tries to follow the success of the first film but after hundreds of found footage films over the past two decades its difficult to stand out with an original idea and the main fault of Blair Witch is that it just follows the same plot lines of the first film but with less subtlety. The larger budget of Blair Witch does make the movie look more professional, but the success of the original played off its low budget feel and made the first movie seem more genuine. Critical reaction to Blair Witch was negative, and the film performed poorly compared to the first film. Despite this, the movie is far better than the Book of Shadows and is scary enough to entertain a newer generation of fans who may not have been around for the release of the first movie or to have experienced its impact.
Posted by The Losman at 11:47 PM