Never Pick Up a Stranger 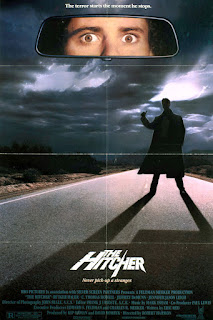 Dir- Robert Harmon
We all have heard that picking up hitchhikers can be dangerous and despite our better judgment people often throw caution to the wind and stop to aid a soul in need. A young man named Jim is driving a luxury car from Chicago to San Diego, and while traveling through Texas, he decides to pick up a stranger in the midst of a storm. The man who is named John Ryder does not speak much but gives Jim the ultimate creep vibes compelling him to throw him out of the car after he fears John will kill him. This encounter sets a series of events in motion as Jim witnesses John being picked up by other travelers and later finding the aftermath of Johns bloody deeds. Jim then finds he is the target of a police manhunt as all of John's murders all seem to point to him. The Hitcher is one of the terrifying movies of the eighties worth checking out, mixing the violence of John's crimes with enough car chases to make this film a compelling chase thriller. The real star is, of course, the Dutch-born Rutger Hauer who has appeared in many classic sci-fi and horror roles. John Ryder is mysterious, relentless, and cunning enough to consider him one of the most underrated horror movie villains. There is no explanation for his crimes besides his desire to see carnage and inflict enough psychological harm to make Jim fear for his life despite his pleas for help from the authorities. The movie does not show John committing his crimes, but we do see the results of his work as Jim seemingly finds himself the target of John's attention. Even after 30 years, The Hitcher is intense and scary enough to remind us all that picking up strangers is always a bad idea. A sequel was made in 2003 as well as a remake in 2007, but both are nowhere as intense or original as the 1986 film.
Posted by The Losman at 11:54 PM