It's weird and pissed off, whatever it is 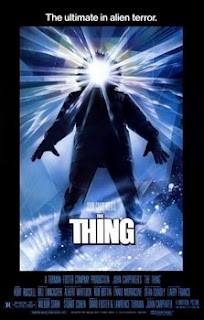 Dir- John Carpenter
Many recall the classic movie The Thing From Another World, a great Sci-Fi film of the cold war era. John Carpenter does it better this time, following the original story of William Campbell, "Who Goes There" more closely. We have what may be the goriest and most FX ridden film of the early 1980's. An Antarctic Expedition finds a frozen package in the burned out remains of a Norwegian Station. Thawing it out, they discover a creepy looking body that looks kind of human. The creature is still alive and pissed off, taking the form of first the dogs and then members of the crew. In the classic friend or foe scenario, we find these men fighting each other trying to determine who is or is not human. The creature is the real star, an indescribable mass that is closer to an HP Lovecraft's Cthulhu monster than anything ever attempted. The ending is somewhat confusing as we may or may not have seen the last of the creepy crawly. The film is an homage to the classic movie and contains some somewhat funny scenes involving the creature.
Posted by The Losman at 10:23 PM