The Prom Night franchise has five movies that have little in common except for the name of the High School (Hamilton High) and the phrase "It's not who you come with, it's who takes you home." Besides Jamie Lee Curtis the big draw was Mary Lou Maloney who appears in two of the films but portrayed by two different actresses. While the first two films have become classics, the latter three are mediocre entries that can be found on Netflix.

Britney Snow appears in this remake of the 1980 slasher film, but it has little in common with the series except for a killer stalking teens at a prom. Prom Night is a bit of an anachronism given that most remakes of popular 80's slasher films featured more violence, nudity and were often made in 3D. The film gives away the identity of the killer in the opening act and is more about an obsessed stalker than the first film's revenge-driven plot that made effective use of red herrings and left you wondering who the killer was. The movie was rated PG-13 as the violence was toned down compared to most slasher films and the sexual content was mostly suggested with no nudity shown. This movie could have easily been a prom episode of a popular TV series with a few dead bodies thrown in. 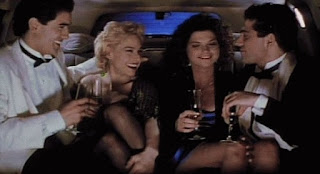 A pair of Catholic school girls are looking forward to the prom but instead decide to ditch it in favor of a weekend with their horny boyfriends. Their weekend plans get sidetracked by a snowstorm that traps them in a remote house that used to be a monastery and a crazy possessed priest who is looking to punish sinful teens. Unlike the previous pair of sequels, Prom Night IV is a pure slasher film with no humor or self-parody in its story. Although the film does briefly feature a prom and Hamilton High School, the movie has more in common with an Exorcist film given the motives of the killer and the role the church played in trying to cover up his crimes. Of the five movies, this entry could have been released as a stand-alone horror film and seems like the Prom Night name was thrown in to tie it into the franchise.

Mary Lou returns yet again to haunt a young teen and have him do her evil bidding in this uninspired sequel that borrows heavily from A Nightmare on Elm Street. Like the previous effort, this film focuses on the supernatural villain Mary Lou Maloney yet without the acid wit of Lisa Schrage as Mary Lou. Courtney Taylor does her best, but she doesn't capture the style that Schrage put into Mary Lou. Instead of Freddy Krueger, she is more like an evil Genie fulfilling the desires of the teen in her twisted way. The movie is a pure horror parody, yet the violence is surprisingly gory, and the deaths are quite creative. 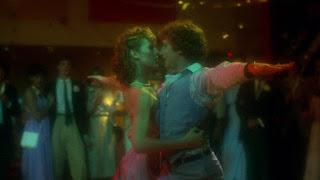 Jamie Leigh stars in this classic which begins with a group of kids playing a tag game which leads to a deadly circumstance. Years later all the kids have grown into teens and are waiting for the big prom. Someone else has grown up too and remembers the fatal game, what follows is a standard slasher fare complete with a wicked beheading and goofy Saturday Night Fever Disco dance-off. Ms. Curtis made a name for herself as one of the most beloved Final Girls with her roles in Halloween, Terror Train and Prom Night, yet of the three films, this was considered the weakest film. Not quite the classic that many believe yet with Jamie Leigh and Leslie Nielson this movie stands out among the pack. 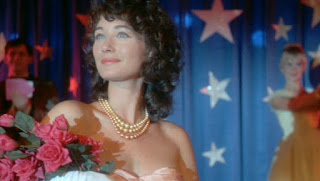 A flashback shows the bitchy, Mary Lou Maloney, doing whatever it takes to get the crown as Prom Queen, well she doesn't get to wear it and dies in a freak accident. 30 years later her ghost returns to claim her prize; she then possesses a busty teen, and the result is quite grizzly. This movie is an in name only sequel is quite decent and features some great special effects and some pretty gruesome murder scenes. The real star is Lisa Schrage as Mary Lou who with her witty one-liners and campy presence give vengeful bitch new meaning. It is a shame they didn't decide to make the Prom Night franchise focus on Mary Lou exclusively, she could have easily become another Freddy Krueger, but instead, the follow-up film would tone her evil spirit down and make her a more comical villain.
Posted by The Losman at 8:34 PM