From the makers of Saw- Only one survivor. Only one chance to escape pure evil. 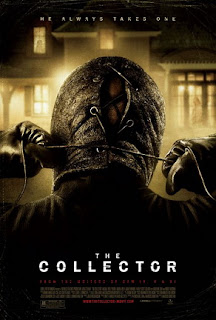 Arkin is an ex-con looking to make a better life for his daughter yet he is drawn back into his old habits when his ex-wife is in debt to loan sharks. He decides to break into the home of a wealthy client only to find that another criminal has decided to target this family leaving a series of deadly traps that he has to avoid at risk of death. Director Marcus Dunstan wrote many of the movies in the Saw franchise and influence of that series is evident in The Collector. The booby traps are elaborate and quite deadly as Arkin tries to find a way out as well as helping the family he has intended to steal from. The Collector is one of the more minor entries in the Torture Porn genre and blends home invasion into a bloody chainsaw of death and gore. Savaged by critics The Collector has become a hit with gorehounds for taking a tired genre and injecting some new blood, the film is similar to Saw in many respects, yet the antagonist is a mad genius who only wishes to kill and torture. Followed by a sequel that is equally gory. 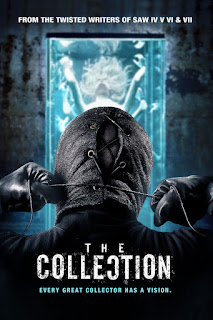 The daughter of wealthy man is taken by the masked Collector who then seeks out Arkin from the first movie to assist in her rescue. Teamed with a band of mercenaries Arkin leads the group into the heart of the Collectors bizarre menagerie of death and gore. This sequel to the 2009 gore cult classic picks up were the first one ended and places the band of armed mercenaries into the heart of The Collectors domain. The traps are more elaborate, and the sheer cruelty of the Collector is on full display with much more gore to include an opening sequence that rivals Ghost Ship in its bloody presentation. Unlike many sequels, The Collection does an effective job of matching its predecessor by amping up the action and terror with a bit of dark humor. Written and directed by the people who made the Saw movies this film will not disappoint those who enjoy good old-fashioned blood and gore.
Posted by The Losman at 12:57 AM