Someone has taken their love of scary movies one step too far! 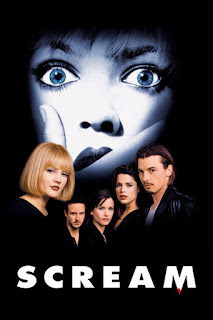 Dir- Wes Craven
Well you know the routine, put in a bunch of generic teens, some big breasted bimbos, really dumb jocks, inept police officers and a killer with a cool mask and cell phone. Sounds so familiar, well this time Wes Craven deliberately makes it so to deliver a spoof which more then makes up for all those silly teen splatter flicks of the 80's. Scream is an homage to these and many other films which used buckets of corn syrup, bad jokes, and Xeroxed scripts to deliver gory splatterfests which lined video store shelves. The film stars Neve Campbell as a virgin teen who is being stalked by a killer who may have murdered her mother a year before. Courtney Cox is the intrepid yet sleazy tabloid reporter out to make a name for herself, and Drew Barrymore is a blonde bimbo who makes a big mistake by not paying enough attention to those silly horror films. In the course of the film, we have Campbell facing the attention of the police, media, and her friends as her boyfriend is nabbed for the crime and may very well be as innocent as the man she pegged as her mother's murderer. Who exactly is the killer, well I'm not gonna tell you!!! Craven blends plenty of blood and gore with enough clichés and cameos to make up for even his misfires of the 80's. Although the film does seem a bit confused on whether it is a spoof or a serious horror film with a few jokes put in, Scream is a rare horror gem that stands out because it is mocking the very clichés that plague films of this genre. In the twenty years since its release Scream would establish a new genre of self-aware horror spoofs called Meta Horror, that would include The Cabin in the Woods, Behind the Mask: The Rise of Leslie Vernon, Shaun of the Dead and the three successful Scream sequels.
Posted by The Losman at 1:23 AM