Some women just won't give up on their man, even after death 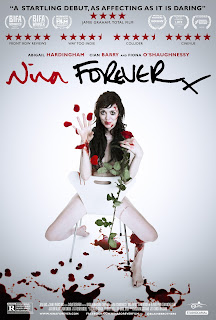 After the death of his girlfriend Nina, Rob considers suicide to escape the grief he feels following her loss. He instead finds the companionship of a young co-worker named Holly who is drawn to Rob after finding out why he tried to kill himself. Their night of intimacy is disturbed by the sudden appearance of a bloody and naked Nina, who has returned from the grave as a revenant to remind Rob that he still has a girlfriend. Nina Forever is a British Horror Comedy that seems to share the same plot of two other movies, Burying the Ex and Life After Beth. This film is nothing like the two other films as they are more zombie inspired and play off the campiness of a reanimated former love. Nina Forever instead focuses on the grief and struggle of someone who has suffered a deep loss and the difficulty of seeking closure in a healthy way. Irish actress Fiona O'Shaughnessy portrays Nina with sarcastic glee, she truly is a pain in the ass and will not give up on her boyfriend or allow him to share intimacy with another woman without ruining their encounter with her bloody body and biting wit. Since Nina appears during a sexual act, it goes without saying that there is plenty of female nudity and lots of bloody sheets left behind. A much better film than Burying the Ex and Life After Beth, Nina Forever is a sexy and morbid film that does seem strangely romantic with its dark humor and deadpan style.
Posted by The Losman at 11:58 PM