Feral Women should be left alone 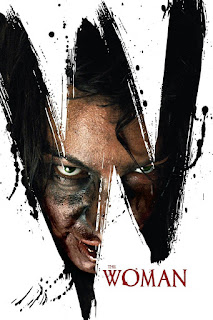 Dir- Lucky McKee
A feral woman is captured and held prisoner by a country lawyer who tells his family that he intends to civilize her, but his intentions mask a darker desire on his part. This 2011 film by Lucky McKee is a sequel to the 2009 film Offspring which is based on Jack Ketchum's novel Off Season. The Woman is a dark story with a dysfunctional family serving as the backdrop for what is a disturbing look into the mind of a Sociopath, using black humor to satirize the perfect family unit. The Woman created a firestorm of controversy when it was screened at Sundance with some viewers responding negatively to the subject matter yet this did help with its marketing and distribution. Watching this movie may unsettle some, but the performances by the cast do standout with special attention to the female roles. Scottish actress Pollyanna McIntosh reprises her role as the unnamed cannibal woman along with Angela Bettis, Sean Bridgers, and standout Lauren Ashley Carter as the daughter. This movie is easily one of the more disturbing movies I have watched recently, though not as intense as Saw or Hostel, The Woman will make its impact.
Posted by The Losman at 1:43 AM