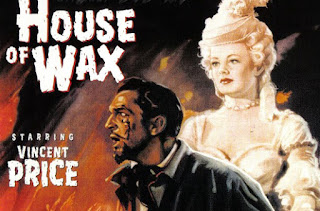 House of Wax was the first color 3-D movie, and it was the efforts of Director Andre De Toth that made it one of the best. He believed that if well employed, 3-D could be used as an extension of the film to make it an even more satisfying experience. Vincent Price plays a mad sculptor who produces superbly realistic wax figures for his museum. With the adoration of his patrons, no one is aware that the sculptures have a dark secret. The movie makes good use of the surroundings to create an atmosphere reminiscent of 19th Century Victorian London. Although the film was based on the 1930's film Mystery of the Wax Museum, House of Wax makes a radical change in the story by employing a finale more reminiscent of the Phantom of the Opera. A film that seems to bank entirely on the performance of its star and, in this case, was successful. Vincent Price was a great actor who starred in many classic films, yet he would always be typecasted into horror roles. A real pity, Vincent Price, was a great performer with plenty of range.
Posted by The Losman at 2:25 AM