Creature From The Black Lagoon (1954) 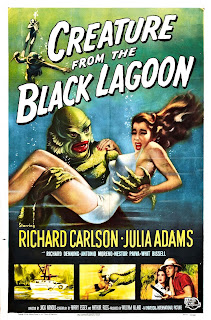 Dir- Jack Arnold
Arguably the most recent of the classic Hollywood movie monsters and one of the most misunderstood. While on an expedition in the Amazon looking for a link between land and seas creatures, explorers discover an amphibious Gill-Man who is captured and later escapes. It then returns and kidnaps the beautiful woman onboard and takes her to its lair only to face off with the crew who seek to rescue the lady. In a time when monster movies were the rage, The Creature From the Black Lagoon stood out for its underwater effects and the fantastic creature costume created for the movie. More than just a simple monster movie, the Gill-Man creature was a complex, intelligent individual, who was looking for companionship and understanding. Filmed in 3-D, the movie would lead to 2 sequels that did not live up to the charm and originality of this classic creature feature.
Posted by The Losman at 10:47 PM