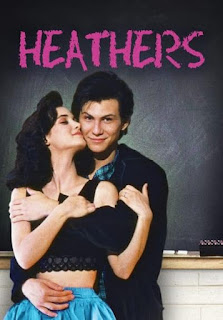 We all remember those cliques in high school; you know the snobby kids who had it all and made those outside suffer, and of course, we always wanted in. It seems that Westerberg High is being run by a trio of mega bitches, each named Heather. Their latest addition is a young lady named Veronica, and she is used for nothing more than writing bogus love letters. Suddenly a new and mysterious boy moves in and takes a liking to Veronica. JD is a loner, and his sense of humor is quite deadly. Together they engineer a series of fake suicides to make the school a better place and end up making the very teens they hated into tragic victims of the teenage problems they are mocking. "Heathers" came upon the scene and opened up the doors of dark comedy to a whole new generation of MTV vidiots. The film is very morbid, and the subject matter is quite shocking, but the direction of Michael Lehmann is well played, and the portrayals of the students involved come across most effectively. This film does speak out to so many of us who went to school and felt left out. Most noted are Wynonna Rider and Christian Slater as the murderous duo, but kudos go to a pre 90210 Shannon Daugherty, who portrays the scheming brunette, Heather Duke.
Posted by The Losman at 5:24 PM