What a Wacko film 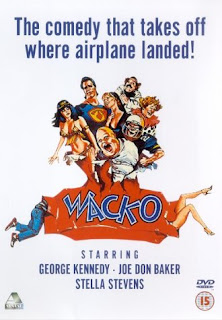 Dir- Greydon Clark
Unlike the very similar Student Bodies, Wacko boasts a cast of some well-known stars including George Kennedy, Julia Duffy, a pre-Dice Andrew Clay and Joe Don Baker. All appear in this silly parody of Psycho, Prom Night and Halloween that just fails as a comedy and as a parody. The movie starts with a girl getting murdered by a killer wielding a lawnmower on Halloween night. Years later the students wanting to attend Hitchcock High’s Halloween Pumpkin Prom are in danger as the infamous Lawn Mower Killer stalks the doomed students who are obviously not in their teens. Duffy portrays the poor teenager who is haunted by the image and sounds of the lawnmower that killed her sister 13 years prior. A weird movie that goes into some bizarre areas and incorporates homage’s from some famous horror films. Wacko is a genuinely bad movie that unlike Students Bodies never attained cult status. It was simply not funny and was just awful. Joe Don Baker does a decent job parodying the roles he was known for, but that is not enough to save this film. Good luck trying to find it as most of the people who appeared in it would do anything to forget this mess.
Posted by The Losman at 11:10 PM