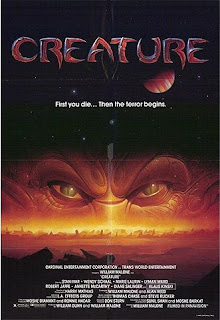 Dir- William Malone
Also known as Titan Find, this Alien knockoff focused on the crew of an American ship sent to find some mysterious containers located during a failed geological survey. The team is surprised to learn that a security officer is among them when it is revealed they are competing with a rival German company for the claim. Their ship is damaged after impulsively landing requiring them to seek help from the rival party. On the German ship, they find dead crewmembers instead along with a mysterious creature that uses mind control to attack them. Joining forces with a German survivor the crew along with the bad ass security officer seek to destroy the creature and return to Earth. What made Creature different from the many other Alien knockoffs was that it has a better script and decent special effects. Special praise goes out to Diane Salinger who plays the security officer Melanie Bryce who in her black leather outfit surely kicked ass a year before Sigourney Weaver did in Aliens. Klaus Kinski also appears as a feisty German scientist who takes a liking to Ms. Bryce. Two versions of this movie exist, the version known as Titan Find is uncut and in widescreen.
Posted by The Losman at 1:06 AM